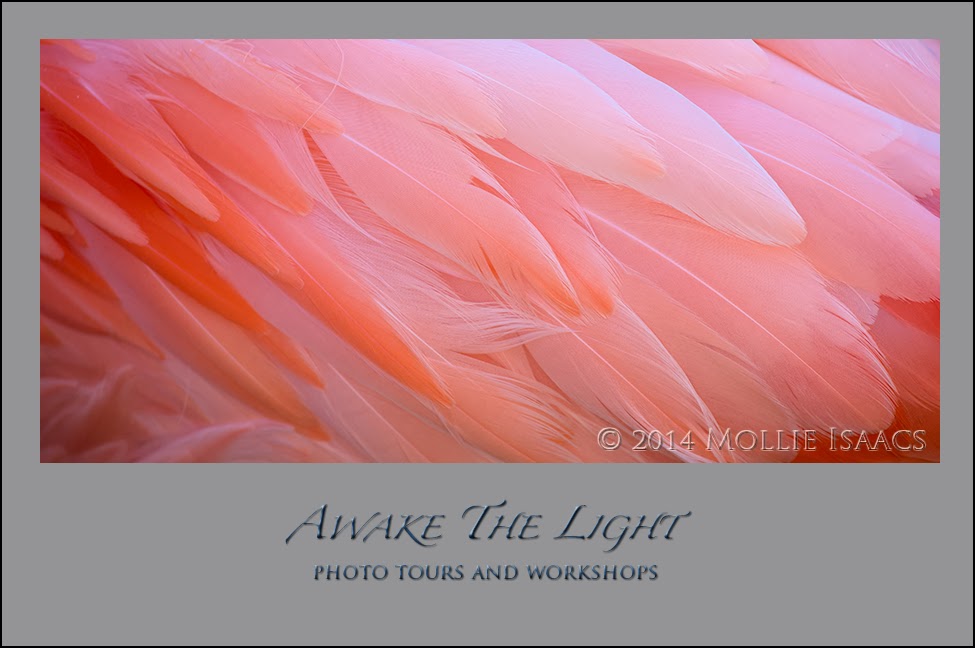 Birds provide a wide variety of photographic opportunities which often result in many successful images. Birds in flight, or with their young, or reflecting in water are just some of the possibilities. Close ups of their feathers, as in today’s photo, is another option.

The colors and textures of feathers vary widely from one species to another. Getting in tight allows you to create many different compositions, and is a nice departure from the more typical literal representation of the bird.

When shooting bird feathers, a long lens is very helpful. Most birds are skittish and may not allow you to get too close. This shot was taken of a captive flamingo, one of several in a small enclosure. These particular birds are used to people being close, and they have limited space so they can’t move too far away.

Even so, they do tend to move constantly, so when a composition presents itself, it is best to be ready to shoot quickly.

When you cannot get close enough, cropping after you have downloaded your images is another possibility. As long as the image is sharp, you will be able to crop in fairly tightly and still retain good detail.

This image was cropped in order to create a panoramic composition, and to strengthen the overall image. Notice that the darker feathers are positioned to the left and the right, with lighter feathers in the center. That creates visual movement throughout the image, and provides more interest.

While there is no true center of interest, the few feathers that are horizontal in the lower center of the frame, as compared to most of the feathers which run on a diagonal from upper left to lower right, draw the eye and add a very subtle focal point.

TODAY’S QUOTE: “Sometimes you just have to take the leap and build your wings on the way down.”  --Kobi Yamada
Posted by Awake The Light at 9:43 AM