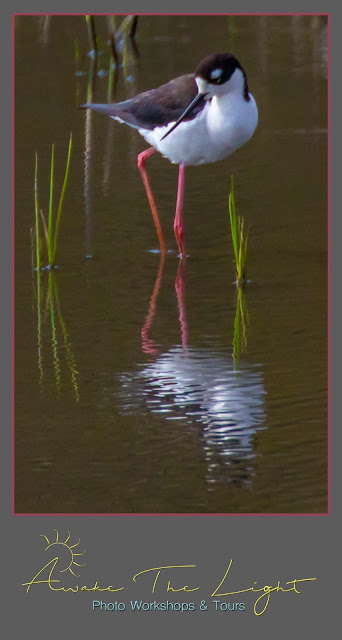 In nature, the simplest things can become lovely images. This stilt turned itself into an art piece with the gentle curve of the head, and the graceful angle of its legs. Things happen very fast with birds and wildlife, and you have to be ready to shoot with no warning.

I am on my way to the Creative Flowers Master Class at Longwood Gardens in Pennsylvania which begins on Monday. So I made an unscheduled stop at Bombay Hook National Wildlife Refuge in Delaware on the way. It was a partly cloudy day with a lot of bird activity. I saw a lot of bald eagles, both mature and immature, but it was the stilts that made the biggest impact on me. These delicate birds seem so fragile, yet are strong and skillful flyers. They move quickly, so shooting with rapid burst enabled me to capture different body and head positions in quick succession.

TODAY'S QUOTE: "I photograph to find out what something would look like photographed."
-- Gary Winogrand
Posted by Awake The Light at 9:36 PM No comments: 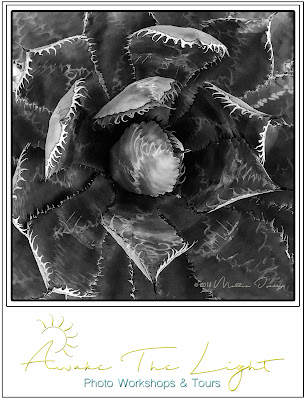 Sometimes black and white is a better choice than color. Once the color is removed, we can see the depth, designs, contours, and overall structure of a subject, unencumbered by the colors that could be distracting.

This interesting cactus was shot in a botanical gardens in Phoenix. It has interesting swirls that barely show up in the color version.

There are several ways to convert an image to black and white. It is relatively easy with either Photoshop or Elements, or Lightroom, or other software options like Silver Efex Pro (now available at no charge from DxO Optics, along with other formerly Nik software).

For this image I used Silver Efex Pro. I started with one of their pre-sets, and then did some tweaking of contrast in Photoshop. This was shot with an iPhone 6, and it is amazing how much detail the phone can capture when the subject is relatively large in the frame.

TODAY'S QUOTE: "Color is descriptive. Black and white is interpretive."  --Elliott Erwitt
Posted by Awake The Light at 11:19 PM No comments: 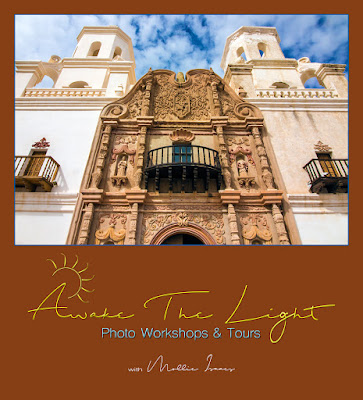 Generally, when shooting architectural subjects, it is best to avoid distortion of vertical lines. But sometimes doing just the opposite can create a more dynamic image. It can give the impression of great height and creates a more powerful composition.

On a recent trip to the desert Southwest I visited the Mission San Xavier del Bac in Tucson, AZ.  Built in the late 1700's, it is considered to be one of the finest examples of Spanish Colonial architecture in the United States. In its day it was a huge building, but by today's standards, while still imposing, it is not overpoweringly large.

But because of its history and its beauty, I wanted to make it look towering which was easy to do with a wide angle lens. Wide angle lenses, because of their optics, generally distort horizontal and/or vertical lines due to the extreme curvature of the lens. If you do not want distortion, keep the camera parallel to the building and do not point the camera upwards. But to increase distortion, stand close to the building and DO point the camera upwards. You will immediately see the effect in the viewfinder.

For this type of image, your point of view can make or break the shot.

TODAY'S QUOTE: "The photographer [unlike the artist] must take what he or she sees just as it is, [but] the liberty is in the selection of the point of view."  -- H. J. Morton
Posted by Awake The Light at 10:00 AM No comments:

Give It A Whirl 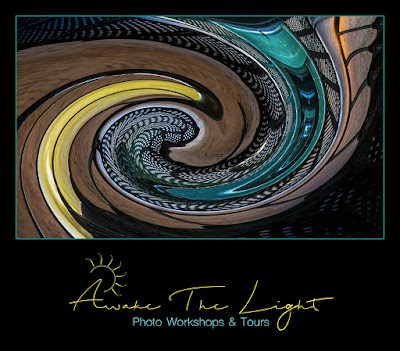 Sometimes a girl's just gotta have fun. While generally most of us create images that are of recognizable things, there are times when creating something a little different is in order.

This image is of a spiral staircase that I wanted to look more like a nautilus shell. The original image, shown here,
was just not working for me. I really wanted a striking image of this stairway and after many unsuccessful attempts I thought I would give the Twirl filter in Photoshop a try. After a little trial and error, I finally got the look I was hoping for.

To access the Twirl filter, first you have to make your image an 8-bit rather than a 16-bit that many cameras normally create. To do this, use Photoshop. Go to Image > Mode. When the drop down box appears, click on 8 bits/channel. Now you can access all filters in Photoshop.

Next go to Filter > Distort > Twirl. Experiment with moving the slider until the amount of twirl suits your vision.

It is easy to overdue the use of filters, so I recommend using them only as an artistic tool that suits the image and the look you want. Using them on the wrong images can result in images that look unusual but not especially visually pleasing. But as with all things, ultimately beauty is in the eye of the beholder, and it is YOUR eye that counts the most.

TODAY'S QUOTE: "Creativity is piercing the mundane to find the marvelous."  --Bill Moyers

Posted by Awake The Light at 9:45 AM No comments: 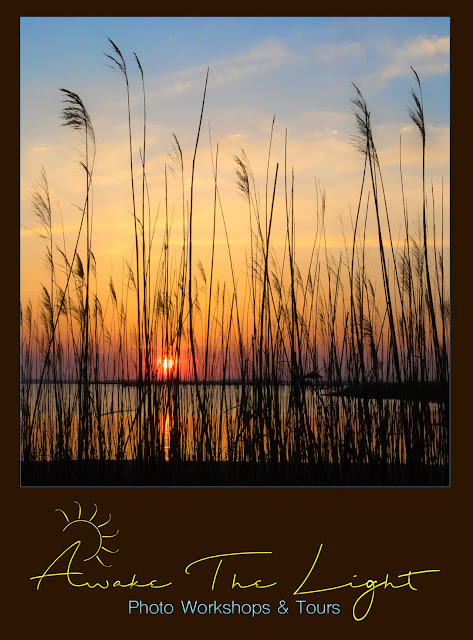 Sometimes a very simple image can be powerful. Sunsets, although commonplace in our daily lives, almost always elicit an emotional response.

The mix of warm and cool tones creates color contrast and more visual interest. So don't shy away from simple images of scenes that many people see every day. YOUR view of it, and YOUR interpretation can create an interesting image that has emotional impact and visual appeal.

TODAY'S QUOTE: "Some days you have to create your own sunshine."  --anonymous

Posted by Awake The Light at 8:03 PM No comments:

Wide panoramic images are fun to shoot and easy to create. This one is of the famous Mittens in Monument Valley Tribal Park in Arizona.

I arrived at the area later in the day than I had intended so I had very little time to grab my gear out of the car and run over to the nearest vantage point. The light was changing quickly since the sun had just set. The Mittens are iconic and photographed quite often. But I wanted something a little different so I decided to shoot for a panoramic image to be created later with Lightroom.

So I quickly took 10 shots of this landscape, starting on the left and overlapping each shot about 30% to 40%. Overlapping is important when using software so that it can merge the images as cleanly as possible.

You do not have to use a tripod for successful panos. This one was created by hand-holding the camera, being careful to keep the horizon pretty much level and in the same place in each shot.

To create a pano in Lightroom, simply select all the images in the series, then click on Photo > Photo Merge > Panorama and then just wait for the software to do its work. One word of caution - the resulting file will be quite large and it will take some time for the pano to be created. This image was originally 80 inches wide. An image that size is slow to form, and is storage hungry. So I recommend that once Lightroom has created the pano, you reduce the size to something more manageable like 15 to 20 inches wide.

TODAY'S QUOTE: "Life is like a landscape. You live in the midst of it but can describe it only from the vantage point of distance. "  --Charles Lindbergh
Posted by Awake The Light at 10:46 PM No comments:

Too Pretty To Eat - NOT! 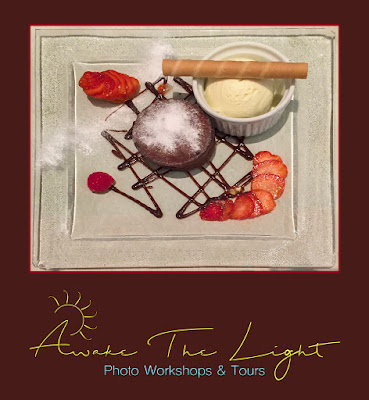 On a personal trip to Switzerland with friends, we stopped for dinner at a basic restaurant in Geneva. A mid-level restaurant, certainly nice but not terribly high-end. But the food presentation was exquisite, worthy of a 5-star restaurant anywhere in the world. And worthy of an art award. The composition of the elements in this simple dessert and the attention to detail were beautiful and impressive.

The basic elements - a small round of chocolate cake, a scoop of vanilla ice cream, 2 sliced strawberries, and a cylindrical cookie -  were beautifully arranged on the "canvas" of the plate, and tied together perfectly with a few diagonal lines of chocolate sauce. We have all had similar ingredients in our hometown restaurants where usually the ice cream is on top of the cake, the chocolate sauce is drizzled over the top, and a couple of strawberries are placed beside it. Certainly tasty but not an art piece as this presentation was. This chef took pride in his work, not only the taste but the appearance as well.

It was certainly photo-worthy, so I snapped this with an iPhone 6. It was so striking that I debated whether to eat the art piece or not. Well, honestly I did not think about it for very long, and quickly devoured the whole thing!

They say art is where you find it, but I never expected to find it in this unassuming restaurant in Geneva.