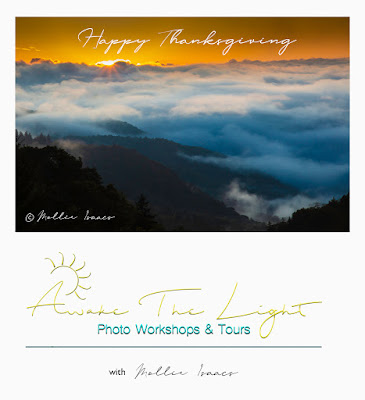 At the start of the holiday season,
I wish you joyous and peaceful times.

"Gratitude unlocks the fullness of life. Gratitude makes sense of our past, brings peace for today, and creates a vision for tomorrow."  --Melody Beattie

"As we express our gratitude, we must never forget that the highest appreciation is not to utter words, but to live by them."  -- John Fitzgerald Kennedy


May your Thanksgiving be filled with family and friends,
love and laughter, and the joy of life.
And as always, Seize The Day! 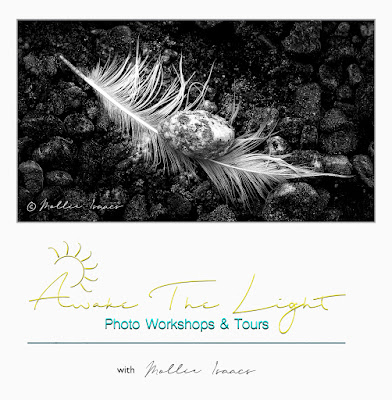 Here is another example of how much Lightroom can improve an image easily and quickly. I was walking along the rocky shoreline in Juneau, Alaska last summer and saw this still life scene. One of the things I love about walking on the beach or along the edge of any body of water is to see what I can find. I don't always find something photogenic, but when I do, it is exciting. I never move or add any elements. If it is there and it looks interesting just as it is, I will photograph it. So when I came across this feather and rock, I was excited.

But the original RAW image was not as punchy as this final version, nor did I get as close to the subject as I should have. Here is the original before anything was done in Lightroom. 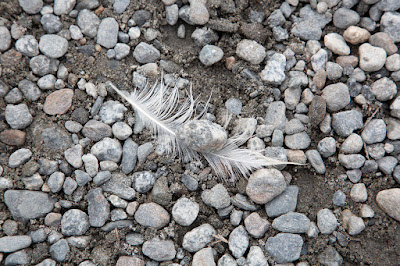 It is flat, rather blah, and not cropped in tightly enough. While the scene excited me when I came across it, the RAW image was quite disappointing. Frankly I was ready to delete it, but decided to try some post-processing in Lightroom to see if anything could be done to make it more visually appealing.

The first step was to crop it to eliminate much of the unnecessary background. Then it was time to go to work on bringing out the whites and the blacks that were there, but hidden.

Here are the steps I used to turn this into the final version at the top of the Blog. [Note: While your first instinct might be to use the Contrast slider to create more punch, that is not the best approach. In fact, I almost never use the Contrast slider. I find it is much better to make changes in small, controllable, incremental steps, rather than to make global changes that affect the entire image all at once. By controlling the Blacks, Whites, Shadows, and Highlights individually you will achieve much better results. ]

1. Move the Blacks slider to -100 to create deeper blacks.

2. Move the Clarity slider to +30 to boost mid-tone contrast.

3. Use the Graduated Filter tool to darken all areas around the feather. I brought the tool in from each of the 4 corners so that the rocks and sand were darkened, but not the feather or the rock on top of it.

4. Even though the image was shot in color, all the tones were either gray, white, or black so I converted it to a Black and White image in Lightroom to give it a full monochromatic look.

That's it. Four easy steps that made a big difference to the final image.

Posted by Awake The Light at 6:05 PM No comments:

Lightroom To The Rescue 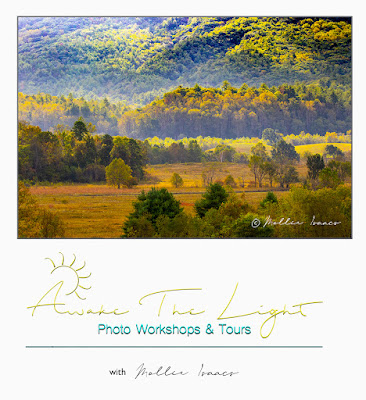 As I have written many times before, Lightroom is my go-to software for post-processing. It is fast, powerful, easy to use, and if you make any mistakes or misjudgments, you can always go back and change whatever you want to.

This image is a great example of the power of Lightroom. It was shot in the Great Smoky Mountains National Park on a very overcast and misty day. Here is the original RAW image, before any Lightroom adjustments.
As you can see, it is a very blah, unexciting image. The mist obliterates most of the color and detail in the image. While the original scene was misty, it did not appear this gray and murky to my eyes. This is the kind of image that, when you first see it on your computer screen after downloading it, you instantly want to delete it as a "loser." But it pays to not be too hasty in that decision. At least take a few minutes to attempt some post-processing to see if there are hidden details that Lightroom can bring out and make better.


Only 5 easy steps were needed in Lightroom to bring out the hidden qualities in this image. Here are the steps used (note that the order of these steps, and the amount of change needed, will vary image by image - there are no hard and fast rules since each image is different and will need various amounts of changes):

1. Moved the Whites slider to +58 to increase the light tones.
2. Moved the Blacks slider to -31 to decrease the dark tones.
3. Moved the Clarity slider to +30 to increase mid-tone contrast.
4. Increase Saturation to +86 to improve color.
5. Dehaze filter to cut through the mist. (note that not all the haze has been removed - since it was a misty day I wanted some of that quality to still show in the image)

So when you first look at your images after downloading and see some that look, well, pretty bad, don't be too hasty to delete them. Take a few minutes to try a few things in Lightroom to see if you can reveal the hidden beauty that is most likely there.

TODAY'S QUOTE: "Everything has beauty, but not everyone sees it."  --Confucius

Posted by Awake The Light at 12:19 PM No comments:

A Thrill And An Honor 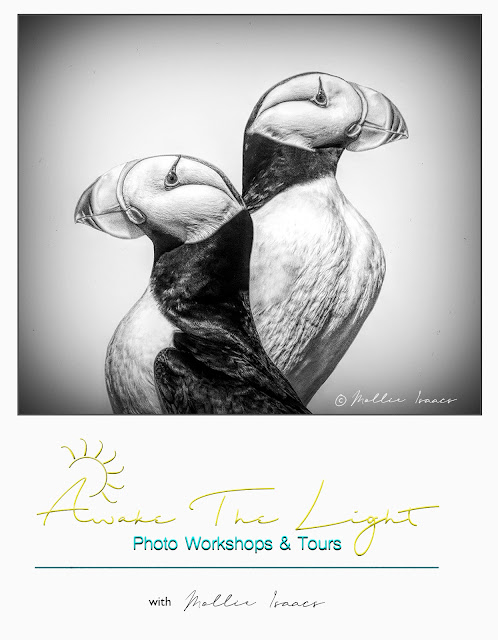 [START YOUR FREE SUBSCRIPTION TO THE BLOG. Simply enter your email address in the small white box to the right of the photo, click the "Submit" button, and follow any prompts. Easy as that! And you can unsubscribe at any time.]

I am happy and honored to announce that this image was selected as one of the Top 100 images in the recently concluded North American Nature Photography Association (NANPA) annual competition. Over 3800 images were submitted. This is a pair of Horned Puffins taken in Alaska.

I entered it in the "Altered Reality" category since it is an artistic rendering of the original color image. I debated for a long time whether to enter a black-and-white version of such colorful subjects. We are used to seeing puffins in full color, so showing them in a monochrome image was a gamble. In this case, the gamble worked!

This breeding pair positioned themselves perfectly on their rocky perch. This rendering (done with Lightroom and Topaz) brings out the texture and contrast more clearly than what our eyes see in a color image.

TODAY'S QUOTE: "Be passionate about your life. Learn to live without the fear of failing. Take a chance, you might just surprise yourself."  -- Nishan Panwar
Posted by Awake The Light at 12:51 PM No comments: