Once In A Lifetime 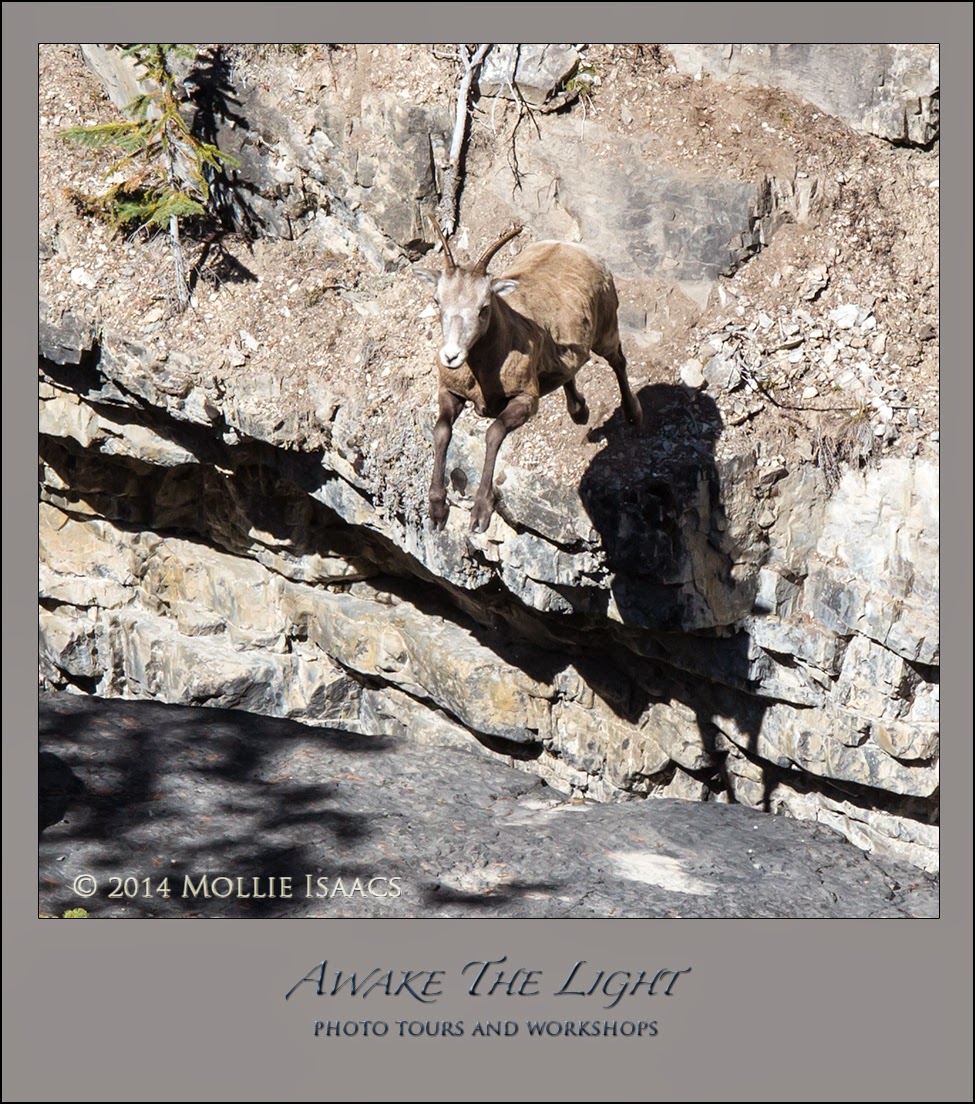 I feel very fortunate to be spending the month of September in the Canadian Rockies on a photographic sojourn. My good friend and superb photographer CL is traveling for several months in the west, and invited me to join her for part of the time. It seems that around nearly every bend in the road we find something to photograph.

We were traveling along the Icefields Parkway in the northern reaches of Banff National Park when we saw several people parked along the side of the road near a bridge. In most places that is a sign that wildlife is nearby. We pulled over safely onto a wide shoulder, grabbed our cameras and got out to take a look. As we walked back to the bridge, which spanned a deep river gorge with a waterfall and a rocky, fast-moving stream, we saw an amazing scene of animal behavior play out. Here is the overall scene on the right.

We saw a line of about 8 female bighorn sheep, some with young, walk out from under the bridge and up the sheer, rocky sides of the gorge, looking for a way to cross the raging torrent safely. It was going to take a hefty leap for them to get across the chasm. The alpha female walked slowly across, then up and down, the steep cliff face to get a better view. She appeared to be seeking the narrowest section of the chasm, and a jumping off point that was higher than the potential landing spot on the other side. She seemed to see a way across, stood still for awhile, appeared to study the options,
but then apparently thought better of it and turned away from the gorge.

All the other sheep stood patiently in line, obviously waiting and watching to see what the alpha female would do.

There was more reconnoitering, more walking along the cliff face. It is miraculous how these animals can stand on and climb up apparently sheer rock. The tiniest ledge, just wide enough for their hooves, is all they need. Their feet are so well-adapted that they can effortlessly traverse seemingly impossible places.

This whole decision-making process took what seemed like a long time, perhaps five minutes or more. All the while, the increasingly large group of human onlookers watched in awe and some trepidation, fearful of the possible outcome.

Finally, with no warning and no sound, the lead female effortlessly bounded from a standing position,
vaulted across the chasm, and landed safely on the other side. Her eyes looked straight ahead, and she calmly walked forward after her soft and controlled landing.

The  others followed her lead, and one at a time each bounded just as effortlessly and safely across. Once the last one had successfully leapt across the chasm,
the 2-legged onlookers cheered,  applauded, and breathed a sigh of relief. We knew we had witnessed a potentially dangerous situation for the sheep, and all came through it safely, and with style and grace. What a privilege to have watched such a scene.

TODAY’S QUOTE: "The continued existence of wildlife and wilderness is important to the quality of life of humans."  --Jim Fowler
Posted by Awake The Light at 9:04 PM