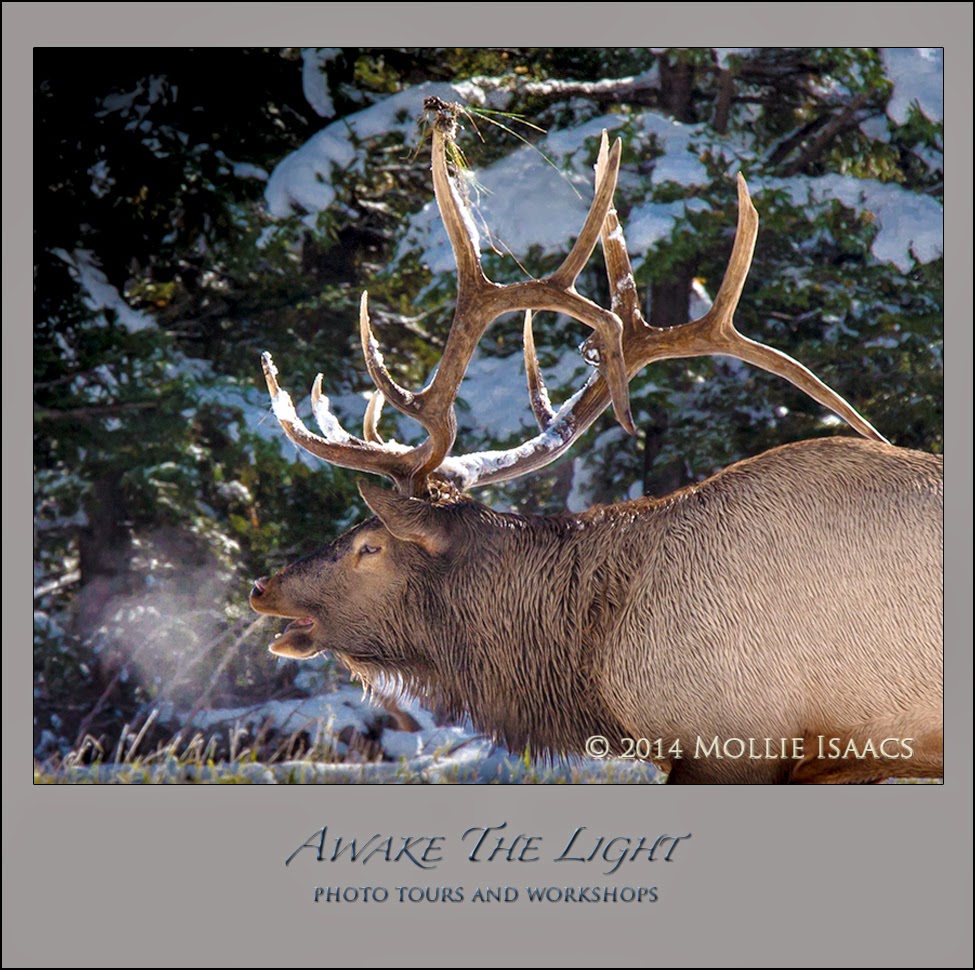 Photographing wildlife is part of why I am here in the Canadian Rockies this month. An early snow has brought some elk down from the high country, and this mature male was herding his harem of 5 females. Three of them were fairly close to him, but the other two lagged far behind. He clearly decided that all 5 needed to be together and in close proximity to him, so he sounded the haunting bugle sound of wild elk. It is an unmistakable sound  -   throaty, multi-toned, demanding, and it reverberates well across distances and in wooded terrain. The two slowpokes quickly picked up their pace and joined the group.

The air was quite cool and we could see his breath as he bugled. You can see the light mist in front of his mouth. What a double whammy treat – to hear AND see the bugle. That was a new experience for me, and while this is just a visual representation, I hope it conveys the mood of the moment.

In the interest of full disclosure, it is important to say that this image was cropped in a good deal.  I was not nearly as close to this big guy as it appears. The image as shot shows his entire body plus a good bit of the surrounding trees and the snow-covered field. The park service recommends keeping a distance of about 100 yards from large animals. Elk, moose, bear, bison and other wildlife can move surprisingly quickly, and can cover great distances much faster than you might imagine. It is important to respect their space and not to try to approach for any reason. No photo is worth endangering yourself or your traveling companions.

It is also vitally important to not disturb the animal’s normal habits of feeding, mating, or movement. When traveling in the terrain of wild animals, it is important to remember that we are in THEIR home, and their requirements must come first.

This shot was taken from the road, just outside the vehicle I was traveling in.  In a car behind us, a thoughtless man kept banging on the outside of his door, hooting, and making other sounds in an effort to entice the elk to look in his direction. While he maintained his distance from the animal, his behavior was certainly wrong, and it appeared to disturb the animal.  He was interested only in his needs, and did not appear to care anything about the animal.

When photographing wildlife, please consider their needs first and treat them with the respect they deserve.

TODAY’S QUOTE: “The worst sin towards our fellow creatures is not to hate them, but to be indifferent to them. That's the essence of inhumanity."  --George Bernard Shaw
Posted by Awake The Light at 7:48 PM