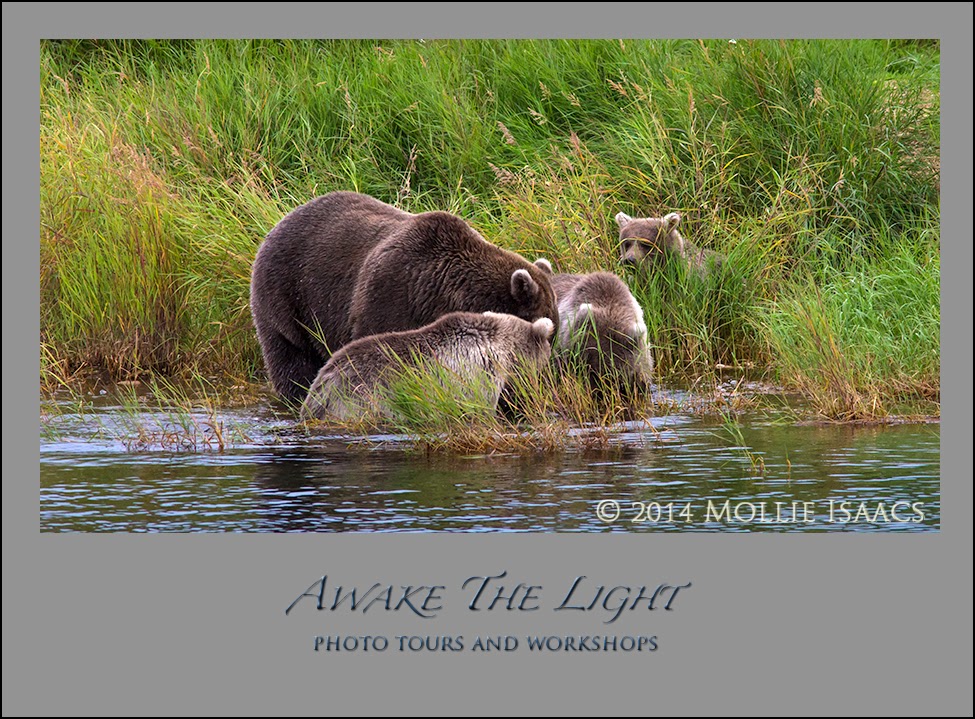 This brown bear mother and three cubs were a close-knit family. The smallest of the three is on shore, watching his mother and siblings grab for salmon. While it appears that the small one is being left out, the mother was very aware of how much each cub was getting and made sure to keep things more or less equal among them.
At Brooks Camp in Alaska, the bears come first and the human visitors must defer to them. That is how it should be. It is a very safe and protected environment for photographing bears, and is patrolled by trained naturalists for the protection of both the bears and the people.

To get to this vantage point, you cross a floating bridge that is open only when the bears are far enough away to make it a safe crossing for the humans. Once across the bridge there is a gated two-level observation platform from which you can shoot. Summer is a popular time and often the platform is filled with photographers shoulder to shoulder who are allotted limited shooting times. But by autumn the crowds have diminished, there is much more elbow room, and you can stay on the platform for as long as you wish.

Because this was an overcast day, exposure was easy. Lens choice was also easy since I knew I wanted to get as close a view as possible. The only real decisions I had to make were when to trip the shutter. All in all, even though it rained off and on and was very windy and cool, it was an easy day with some great bear action.

What a thrill it was to be able to photograph this little family for hours at a time. They swam, they fished, they napped, they nursed, and they caught and ate many salmon. Being in the wild, and being able to photograph wildlife from a safe vantage point, is the best of both worlds.

TODAY’S QUOTE: “Look deep into nature, and then you will understand everything better.”  --Albert Einstein
Posted by Awake The Light at 8:01 AM