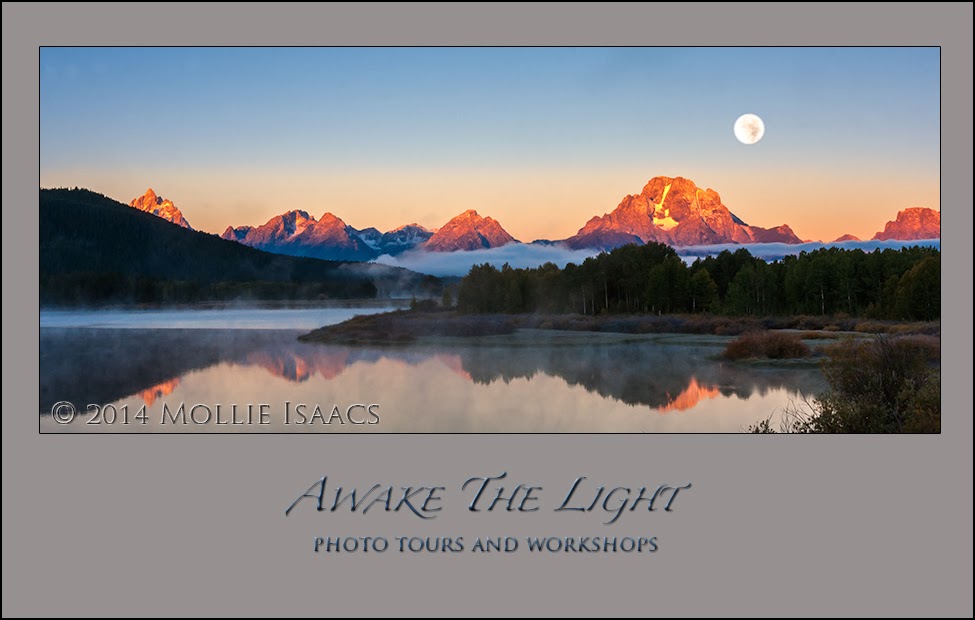 When the full moon sets at the same time that the sun rises, it is breathtaking. It was lucky timing that this occurred while we were in the Great Teton National Park. What a spectacular setting for this natural cosmic wonder.

When photographing the moon, especially when rising or setting, a shutter speed of no slower than 1/30 sec. is necessary. The movement of the moon is relatively rapid as it nears the horizon and if you use a longer shutter speed the moon will appear either oblong or blurred because of its movement.

The other thing to be aware of when photographing a full moon is its brightness. That was not a problem for this shot since there was already a lot of light in the sky, but when the sky is darker, and especially when photographing moonrise, the moon is generally much brighter than the surrounding sky and is easily overexposed.

Do not be surprised to see the “blinkies” on your histogram indicating an overexposure of the moon. Exposure compensation of one or two stops will help, but you then have to be careful not to underexpose the sky and foreground. Taking multiple shots at different exposures, and then combining the best one for the overall scene with the best exposure of the moon is a good solution. This can be done in Elements or Photoshop. HDR can also work, but remember that the moon may be in a slightly different location on each shot, since its movement is so rapid.

TODAY’S QUOTE: “For most people, we often marvel at the beauty of a sunrise or the magnificence of a full moon, but it is impossible to fathom the magnitude of the universe that surrounds us.”  --Richard H. Baker
Posted by Awake The Light at 7:46 AM