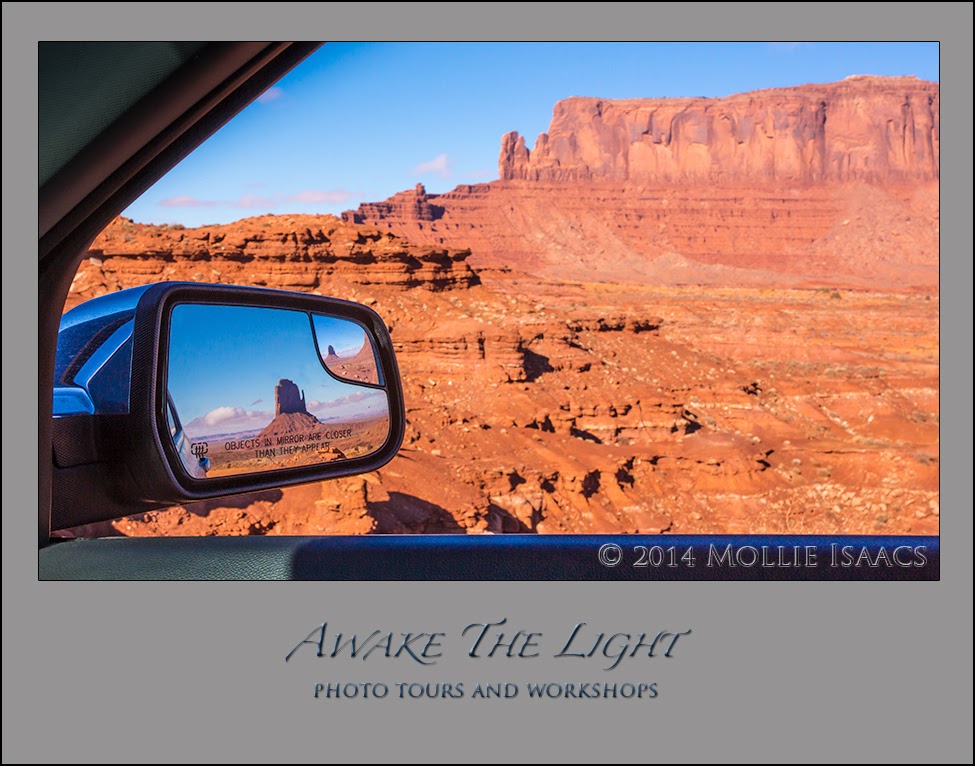 While riding through one of my favorite places, Monument Valley National Tribal Park at the Arizona / Utah border, I happened to glance at the car's side mirror and was rewarded with this great view.  It is one of the park's famous Mitten formations perfectly framed by the mirror.

Normally I try to eliminate any sign of civilization when I am photographing a natural scene, and I had done so in earlier shots of the Mittens. But as I was heading back to the hotel, I was lucky enough to see this Mitten come into view in the mirror, and it seemed like a unique shot asking to be taken.

Because it was a very clear day with bright blue skies, the exposure was easy. The light on the large butte outside the window was the same as on the Mitten. The inside of the car is dark, and does not distract from the rest of the image.

Very little optimization was needed on this image. The sky needed a bit more saturation, but that was about it.

TODAY'S QUOTE: "...there are blessings in the desert. You can be pulled into the limitless,...or you can do the beauty of minutiae...."

Posted by Awake The Light at 8:41 PM No comments:

Shaped By Water, Wind, and Time 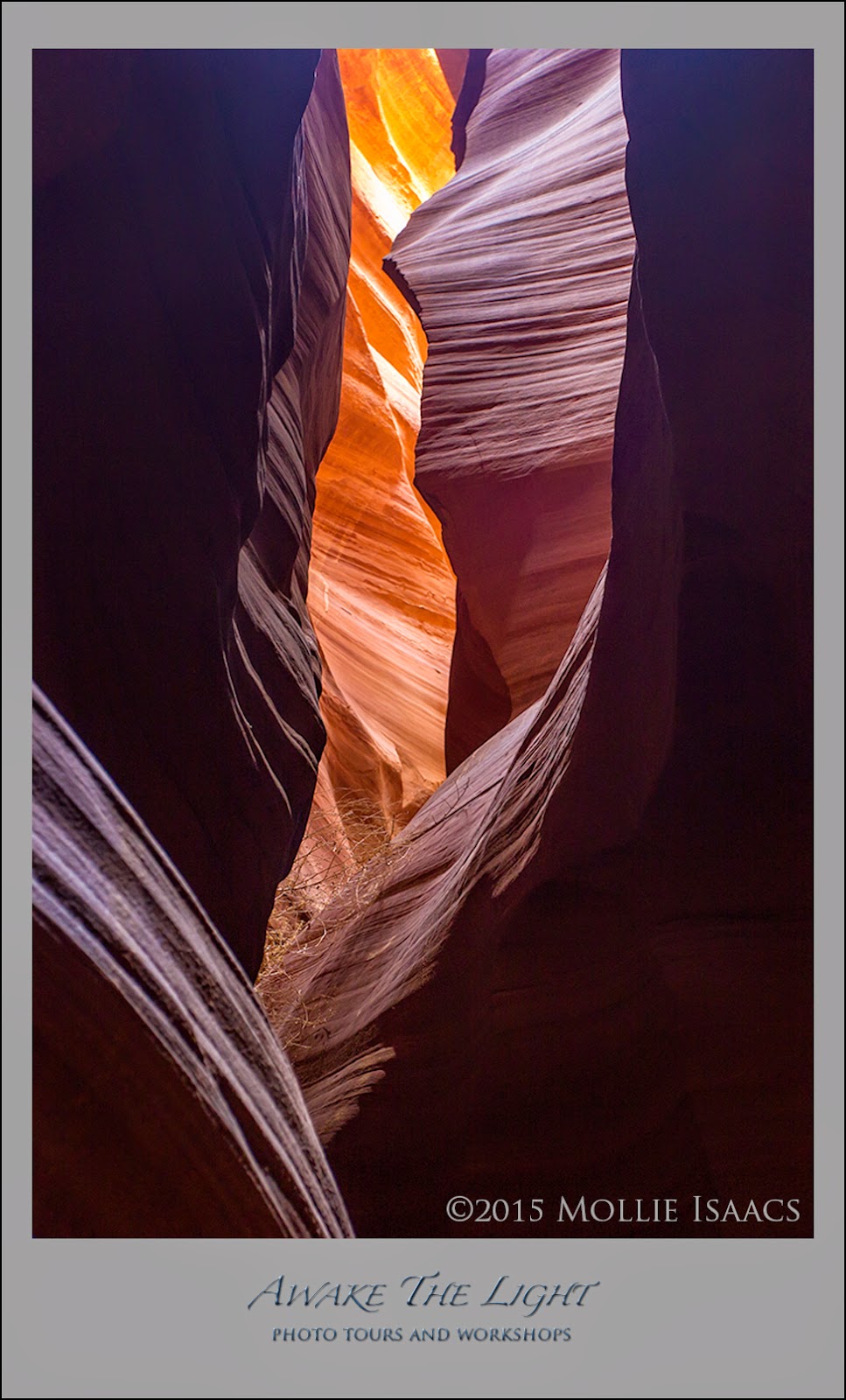 My whirlwind trip in the desert southwest has been going well with stops at several iconic places including Antelope Canyon. The lovely slot canyon is world famous, and presents many opportunities to photograph swirling shapes and rich colors.

In this canyon, photographs can be made almost anywhere. You just have to slow down and look, really look, at the rock formations and how they relate to one another. Look for line and shape. Look for separation between the elements. Look for variations in lighting to add interest.

These tips can apply to many different subjects, not just slot canyons. Try to consider all possibilities when out shooting. Keep a careful eye on the histogram, shutter speeds and f-stops. Being alert and aware will help you get better pictures, regardless of the subject. 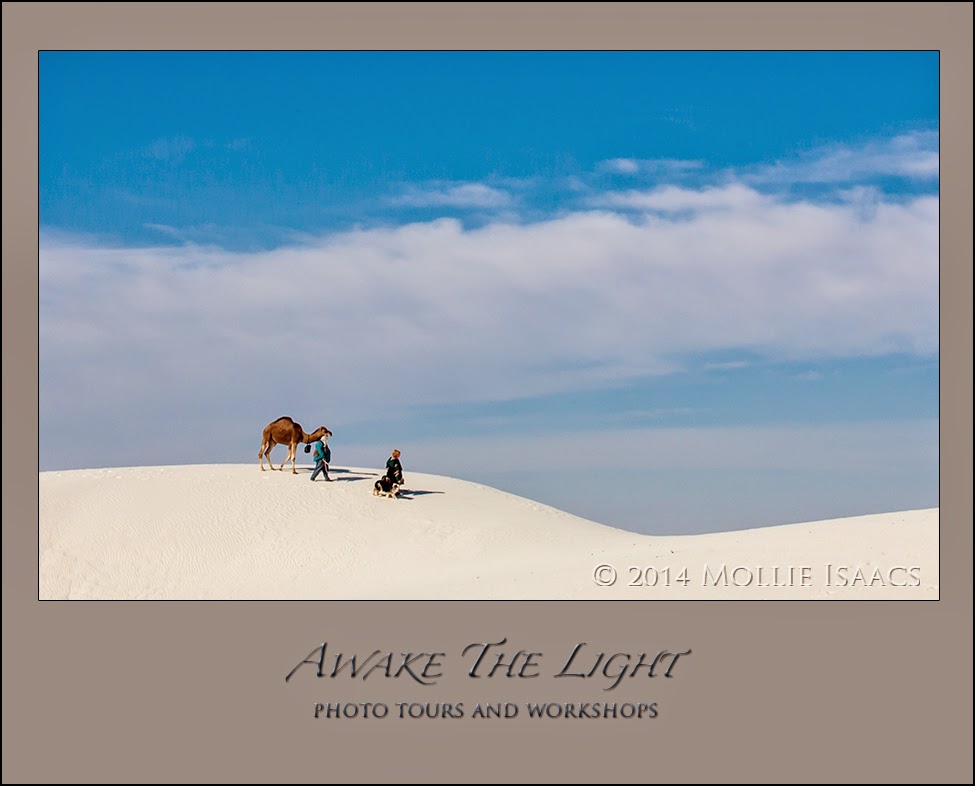 I am traveling in the desert southwest this month, and made a short visit to White Sands National Monument. It was a Sunday afternoon and the sky was a sunny brilliant blue. I was driving through the park and saw what I thought was (could it be?) a camel in a horse trailer! I quickly turned around, and sure enough it was indeed a camel. What are the odds? It appeared that the trailer was being driven out of the park, so I figured I had missed the chance of photographing a camel in its perfect environment and I continued with my journey through the park. As I finished riding through the main road and headed for the park exit, I was delighted to see the horse trailer parked in a side overlook and decided to wait about 10 minutes in hopes of seeing the camel walking across the dunes. After nearly 15 minutes I decided to move on, and just then I was treated to this sight. What a treat!

The camel, whose name I later learned was Mitchell, was being led across the dunes by the husband and wife who own him. Their dogs were also along for the walk. When they returned to their trailer, I got more information. Turns out they live about 30 minutes from White Sands, and take Mitchell out for a dune walk each Sunday afternoon.

What are the chances of traveling 3/4s of the way across the country, and being in the right place at the right time to see such an unusual sight? It was sheer serendipity. Had I not been there on a Sunday, I would never have seen this. Had I arrived a couple of hours earlier or later I would not have seen this.

The lesson is that you should be prepared for the unusual, the unexpected, at all times. Be open to photographic opportunities any time you are out with your camera. You never know when an exciting, groundbreaking opportunity will present itself. Go out there, have fun, and be ready.

TODAY'S QUOTE: "I love not knowing what might be around the corner. I love serendipity."  --Twiggy
Posted by Awake The Light at 11:33 PM No comments: 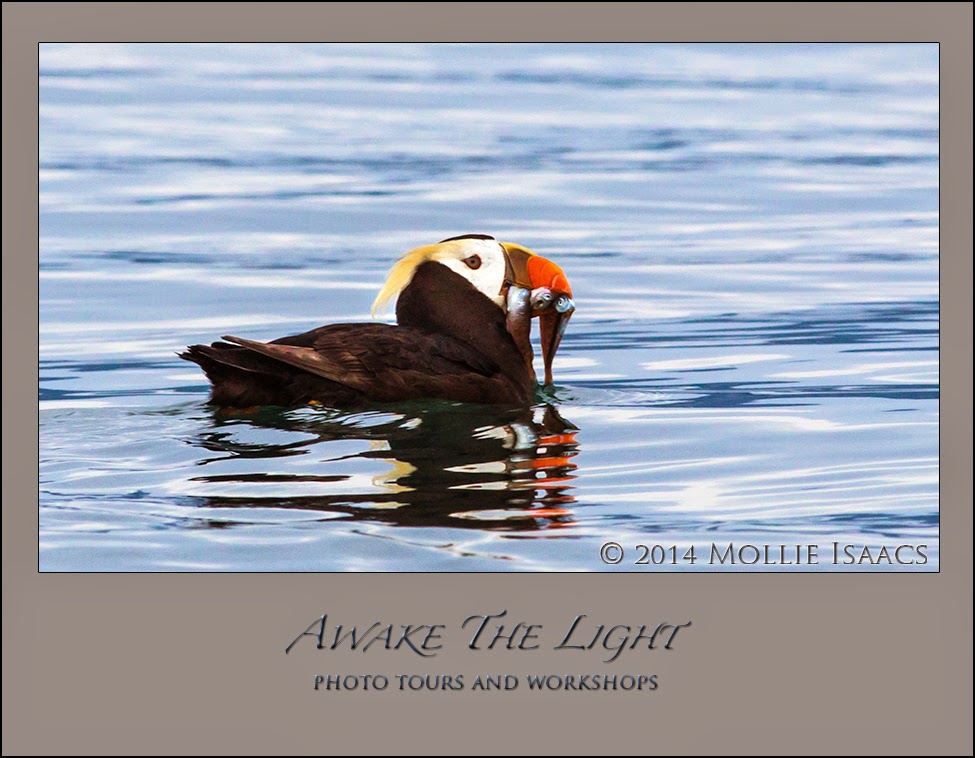 If you do not already receive our free monthly e-newsletter, sign up now and begin receiving it automatically every month in your inbox. Simply email us at this address  awakethelight@charter.net  and put YES in the subject line.

There is no obligation, and you can opt out at any time. The newsletter varies each month, with information on our photo workshops and tours, educational articles, and tips from the pros. We never share or sell your information, so your privacy is assured.

The photo above is the cover photo in this month's newsletter which came out today. So sign up now and begin enjoying a monthly treat!

TODAY'S QUOTE: "Education is the movement from darkness to light."  --Allen Bloom
Posted by Awake The Light at 11:32 PM No comments: 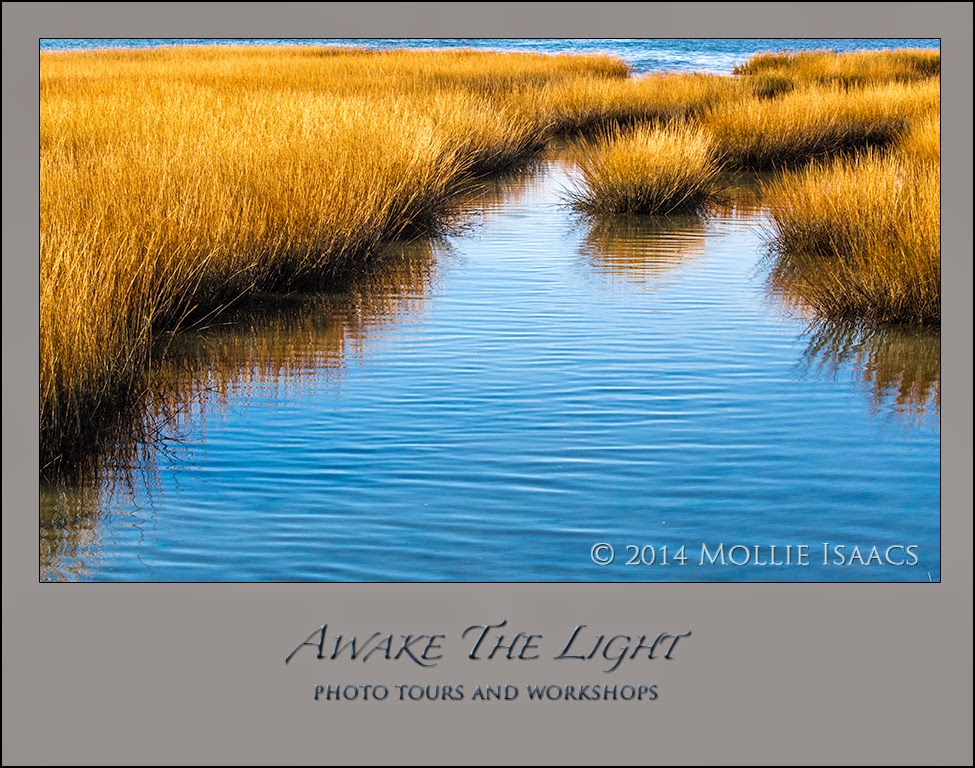 This is a very simple image, but it grabs your eye quickly. Why? Several reasons.

The first is color. A mix of cool and warm tones is almost always a grabber. The yellow grasses against the blue water create a nice balance of color. That color combination more than any other seems to get our attention quickly and holds us in the image.

Next is leading lines. In this image the eye is brought in from the lower left with the line of grasses, and is drawn up toward the center and right side to the other clumps of grasses. In our western culture, since we read from left to right, it is easy to enter an image on the left and them move around toward the right.

The final element is texture. The texture of the grasses is quite strong, and it is complemented by the more delicate texture of the ripples on the surface of the water.

So three interrelated elements serve to create a cohesive image. Simple but interesting.

TODAY'S QUOTE: "The art of simplicity is a puzzle of complexity."  --Douglas Horton
Posted by Awake The Light at 10:22 PM No comments: