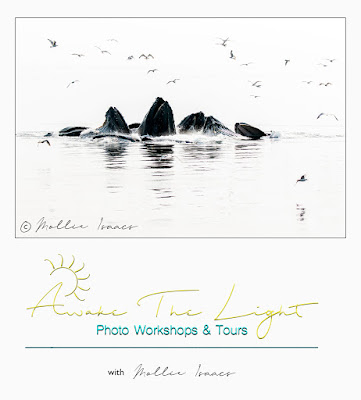 When humpback whales communicate to engage in bubble net feeding, it will absolutely blow you away! If you are not familiar with what bubble net feeding is, here's the short version - a group of whales come together because of an abundance of fish or other enticing food. When they cooperate as a group, each one can eat much more than attempting to catch food alone. They begin by doing a deep dive, and then begin to blow bubbles in a circle that form a "net" around a school of fish. The bubbles force the fish to come closer to the surface of the water, and to group together in the middle of the circle of bubbles. At that point the whales, who are now below the fish in the "net," thrust themselves upward through the group of fish and grab large amounts in their huge mouths. The upward thrust, which lasts only a few seconds, brings the whales up above the surface when we can grab some shots.

To see up to ten or more 60,000 pound animals blast upwards above the surface of the water is an amazing sight. We were exceptionally lucky during one of last month's Alaska trips to see this behavior for 5 days in a row. What incredible luck!

This shot, taken very late in the day, presented a technical problem. The whales are dark and it would have been easy to underexpose them since the surface of the water was much brighter than they were. The solution was to use Exposure Compensation to make sure the dark whales received enough exposure to not look pure black. It is important to remember that when dark tones are underexposed, it is difficult for Lightroom or other optimization software to bring out the details, and often the final result appears very noisy and grainy

The final result is a bit more artsy than a traditional rendition of this scene. It conveys the power and movement of the animals, including the birds, offset by the pure white background.  Although no artwork or filters were used on this image, the look is reminiscent of a charcoal drawing.