Cutest Critter In The Water 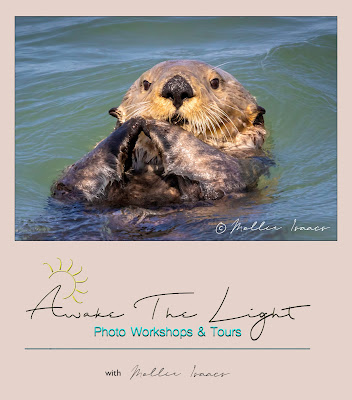 Sea otters are absolutely adorable, and a thrill to watch cavorting in the water. They twist and twirl, and are masters at diving.

This male was an unusual sight in the area of Alaska we were traveling in. He had actually been sighted nearly 100 miles away from this location just a few days prior to our being treated to his antics. While we don't know what brought him to the vicinity of our boat, we were excited to see him.

Typical of sea otters, he would look at us, then ignore us, then look at us again. He appeared as curious to see us as we were to see him. And he performed for us long enough for us to get some great images.

This is one of my favorites since he had his front paws placed perfectly near his face. Doesn't get any cuter than that!

One of the thrills of being in Alaska is seeing a huge variety of wildlife, AND being able to photograph them.  I'll be returning to Alaska in 2021 to photograph brown bears, also called grizzly bears. It will be at my favorite bears location, timed to coincide with the annual salmon run.

If you would like to join me in Alaska August 29 - September 4, 2021 for this exciting brown bears trip, please send me an email expressing interest. It will put you on the "Interested List" but does not obligate you at this time. Details are being finalized, but this trip has not been publicly announced yet. So if you would like to beat the rush and get on the list now, let me know. I will send you details as soon as they are set. Limited to only 8 photographers.

TODAY'S QUOTE: "Do not delay. Do not delay. The golden moments fly!"  -- Henry Wadsworth Longfellow
Posted by Awake The Light at 6:22 PM