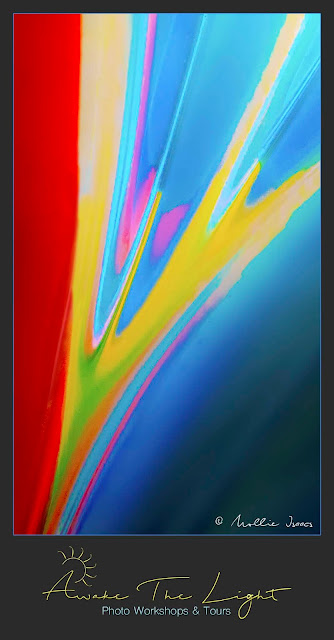 Since getting back from Alaska, I have been taking some time to edit the over 20,000 images I took. It is a HUGE task, so I decided to take a creative break and experiment with some non-nature and non-wildlife images.

As you recall, I was testing out the Panasonic G9 mirrorless body and several Leica lenses. Panasonic had loaned me the body and several lenses, including the 45mm macro (equivalent to 90mm on a full frame sensor) to test. I find colorful glassware is a great subject for macro and abstracts, and that was the subject for this shot. It is a small glass bowl from a museum gift shop.

Here is the original RAW image uncropped. When I took this shot I was just getting the feel of the macro lens and was not concerned about composition.
I was just firing off shots. But in looking at it on my computer screen, the area I have outlined in black got my attention. I have found that with both my Canon gear and the Panasonic system, extensive cropping can still produce some exciting and usable images (as long as you do not want to make 6-foot wide prints for your living room wall!). So I cropped the image as shown, and optimized it in Lightroom. Nothing extreme was done, but because of the colors and the shapes, an interesting image began to appear.


The steps in Lightroom were simple. Here is what I did, after cropping:
1.  reduced Clarity to minus 60 to create a softer look;
2.  boosted Vibrance to +100 (I rarely go this far with either Vibrance or Saturation, but when creating an artistic image, going a bit overboard is OK);
3.  in the HSL box, increased the Saturation of blue, yellow, and orange;
4.  used the Graduated Filter tool to darken the lower right and entire left side;
5.  used the Luminance slider to reduce noise.

Because of the extreme crop, the reduced Clarity, and the boosted colors, the entire image took on a somewhat surreal look which is the artsy look I was hoping for. No filters or other software was used.

So now I can go back to the tedious task of editing!

TODAY'S QUOTE: "All life is an experiment. The more experiments you make the better."  --Ralph Waldo Emerson