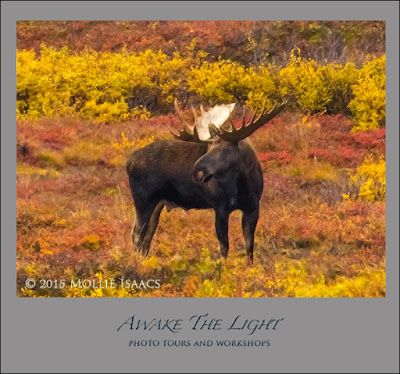 This was a banner year for moose in Denali National Park in Alaska. We saw more moose, and bigger healthier moose than in the past. This guy was huge. One of the members of the group compared his antlers to satellite dishes, and she was not far off.

His dark fur is set off beautifully against the fall tundra. We were lucky to hit peak fall color this year. Fall is always a moving target in Alaska, and you never know exactly when the colors will pop. And once they start to turn, the change occurs quickly in this far northern latitude. Within 5 days the entire show could be over.

Moose are elusive creatures in Denali and often are hidden in deep foliage, or stay very far away from even the longest of lenses. We were lucky to have seen several within range, but even so, this image is cropped a good deal.

Moose are also dangerous animals, even though they look slow and benign. They can charge at 40 or more miles per hour, and can cover a lot of ground quickly so keeping your distance is always imperative, especially during the fall mating season. Bulls are very protective of their females and will attack if they feel threatened.

In Denali we always travel with an experienced guide / driver who knows where to look for moose and how close we can approach safely.

It was a thrill to see so much wildlife during our time in there.

TODAY'S QUOTE: "Alaska ... is just like anyplace else, except with mountains and moose."  -Tom Bodett