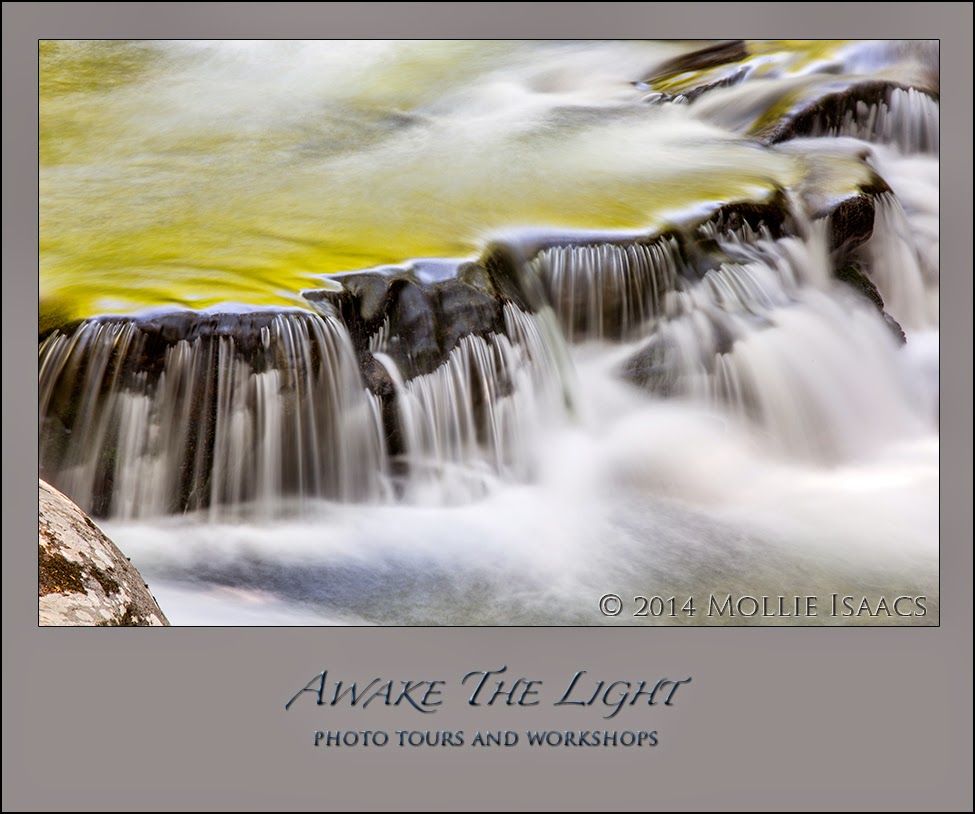 The Great Smoky Mountains National Park is renown for its huge array of wildflowers, and its beautiful flowing streams. It is an incredible water world. Today’s photo shows a small portion of a large stream in the late afternoon. The yellowish reflections are the late day warm-toned reflections of fresh spring leaves on the surrounding trees.

Photographing moving water can be fun and creative. Photographers often ask about the best shutter speed to show the movement of water. The answer is that there is no one standard answer. Water moves at different speeds, depending on how full a stream is and how much water is flowing at any given time. After a rainfall streams often flow at a faster rate of speed, so a faster shutter speed than you used the last time you photographed the same stream might provide the same look.

Also, some people prefer a softer look which is achieved with a slower shutter speed, while others prefer a less soft look achieved by using a slightly faster speed.

The best approach is to try a variety of shutter speeds, and then decide after downloading your images which ones work best. I generally start with a shutter speed of about ¼ second. Then I double the time with each succeeding shot, going to ½ second, then 1 second, then 2 seconds and so on.

Set the ISO at 100. Use Aperture Priority and set the f/stop as high as it will go on your lens, perhaps f/22 or f/32. Then see what the shutter speed is.

If you cannot get the shutter speed slow enough, add a polarizing filter or a neutral density filter. Either of these, or both in combination, will cut the amount of light getting through the lens, and consequently will allow you to slow down the shutter speed.

It is best to photograph moving water on overcast days, or early in the morning or late in the afternoon, when no direct sunlight strikes the surface of the water. Direct sunlight on water can create very bright white areas, causing extreme contrast and making it difficult to maintain good detail in the whites as well as in the dark tones.

Try a variety of shots, some showing a long view of the stream, and others showing close up vignettes of smaller areas. The best way to learn what works best for you is to just get out there and shoot!

TODAY’S QUOTE: “Practice is the best of all instructors.”  --Publilius Syrus
Posted by Awake The Light at 5:06 PM