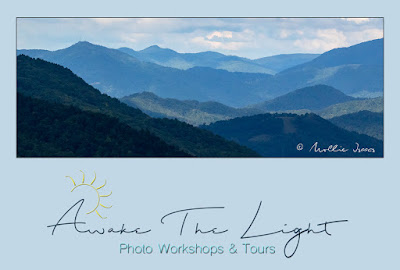 Many heartfelt thanks to everyone who has been contacting me with concern about my welfare in light of Hurricane Florence. I was very touched by the outpouring of concern from so many clients and friends. As many of you know, I make my home at the Outer Banks of North Carolina, and earlier in the week it appeared that we were going to be in the bull's-eye of this terrible storm.

Because of the unpredictability of weather patterns, in spite of all our technological advances in weather forecasting, the storm took an unexpected turn to the south and will deliver just a glancing blow to the Outer Banks. But before the authorities knew that, they issued a mandatory evacuation of all visitors and residents.

So I headed to western North Carolina in hopes of avoiding the worst of the storm's wrath. I revisited the Blue Ridge Parkway, shown in today's image. It is one of our country's most beautiful roadways through the mountains. The weather was great with no hint of the havoc being wrought on eastern North Carolina and South Carolina.

But now in light of the storm's new track, this part of the state will experience flash floods over the weekend. So I am now heading north and east to Richmond, VA which, at least for now, appears to be out of the line of fire. Quite a sojourn. I have chosen to look at it as an adventure, although not one I wish to repeat any time soon!

I think next time evacuations are ordered, I should just go as far away as possible, perhaps Tahiti!

TODAY'S QUOTE: "In reality, you don't ever change the hurricane. You just learn how to stay out of its path.  --Jodi Picoult