What A Difference A Day Makes! 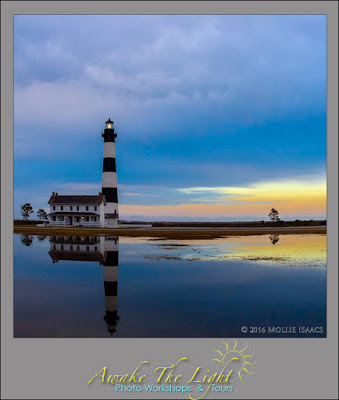 This is a similar view of the lighthouse that appeared in the blog several days ago here  http://awakethelight.blogspot.com/2016/01/after-storm.html   But wow, what a difference weather conditions and time of day can make to a scene.

The previous shot was taken in the early afternoon on a sunny day. This one was taken at sunset with heavy overcast conditions. I was lucky that the clouds were not as thick along the horizon line in the southwest, allowing the warm sunset colors to show through. It was already dark enough that the lighthouse was lit, and I timed the shot to catch the light when it was on. Most lighthouses are set to have their light go one and off at specific intervals. The intervals are different from one lighthouse to another, so that ships at sea will know exactly which lighthouse they are seeing.

This dark, moody shot is titled "Last Light Of Day, First Light Of Evening." The colors were richened using Lightroom, and I chose to keep the image dark to give the feel of the fading sunlight and the clear message that darkness was advancing.

Compare this shot with the previous one and see how different each one makes you feel. You can set a mood with an image, and it is interesting to compare similar scenes at different times of day. Even if you have shot a favorite scene in your area many times, continue to try shooting it at different times of day and with different weather conditions. There is no reason not to shoot the places you love over and over again. After all, the French impressionist painter Claude Monet painted his gardens dozens of times in an effort to faithfully represent the ever-changing quality of light. The differences in the quality of light reveal various moods of essentially the same subject.

TODAY'S QUOTE: "It is on the strength of observation and reflection that one finds a way. So we must dig and delve unceasingly."  --Claude Monet
Posted by Awake The Light at 9:20 AM