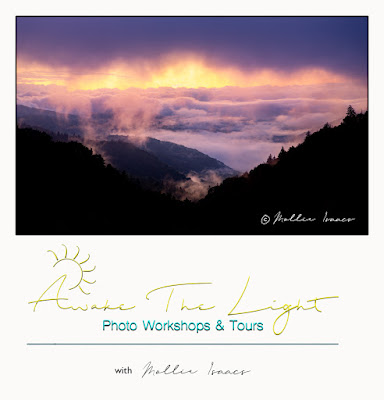 I came across this sunrise image that I took in the Great Smoky Mountains National Park about a year ago, and wanted to share it with you.  It was a very misty, cloudy morning and the dramatic scene only lasted a few minutes. The thick mist hanging in the valleys is what gave the Smokies its name.

As with all sunrise shooting options, you never know what Mother Nature will provide. I have been in the Smokies many times, and sunrise is always a big unknown. Sometimes the fog is so thick that you can barely see a few feet in front of you, and no photograph is possible. At other times it is too clear, and the drama that you hope for never happens. But on this particular morning, even though we never saw the sun actually pop up over the horizon because of the thick mist and clouds, we were treated to this spectacular sunrise with shades of purples and yellows.

When getting up early to shoot sunrise, it is best to plan to arrive at least 45 minutes before the officially stated sunrise time. The sky begins to get light about an hour before sunrise, and often the best shots happen before the sun actually breaks the horizon.

I like to prepare my gear the night before so that when I arrive at the location, it is a simple matter of setting up my tripod, attaching my camera, and then waiting for the hoped-for show to begin. I use Aperture Priority, pre-set my camera to ISO 800, and the aperture at about f/16. The shutter speed will set itself, and will be very slow in the pre-sunrise hour. As the skies begin to lighten, I change the ISO as needed, first to 400, and then sometimes to 200.

Setting the aperture to f/16 or smaller (f/22 or f/32, depending on the capability of your lens) gives you the best chance of getting the entire scene in sharp focus. In low light situations, like pre-sunrise, it is hard for your lens to autofocus properly, and it can also be difficult to focus manually as well. An aperture of f/16 or smaller gives you better Depth of Field which will help keep the scene sharp even if you miss the focus slightly.

Now that sunrise is later than during the summer months is a great time to get out there and get some great sunrise shots! You do not have to get up quite so early, and if one day does not provide you with a great sunrise, perhaps the next day will.