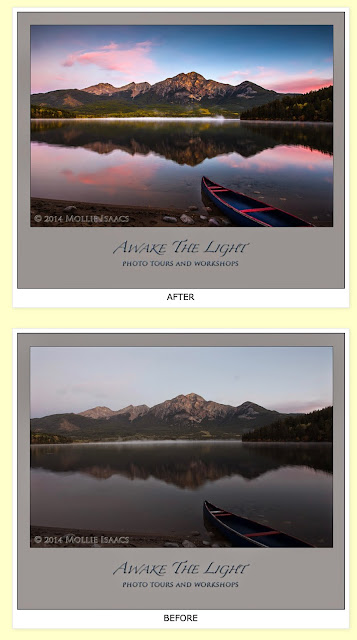 Today's lesson will help you turn lemons into lemonade. We all have images we shot some time ago that we want to like but they just do not have the pop or impact we expected. This is a great time to review some of your old images to see if another attempt at improving them in Lightroom can bring them back from the brink of boring.

As you know, Lightroom is my software of choice for nature and wildlife images. It can powerfully bring an image to life without making it look overdone or unrealistic. And that is the key to award-winning nature images - full of impact and beauty but without an artificial look.

The Before and After images above are the same shot. The Before image is the RAW image before processing, and the After is the same image after being processed in Lightroom.

It was a beautiful, pristine dawn in Jasper National Park in Canada, but you would never know that by looking at the Before image. It looks gray, dull, and unexciting. While there were pinks and blues in the sky, and lovely fall colors on the hillsides across the lake, they do not appear in the original RAW image. Why?

In general, regardless of the brand of camera you use, camera sensors are designed to be "dumbed down." What does that mean? It means that digital camera sensors were designed to do their jobs quickly, and in order to do that the sensor will capture an image (this applies to RAW images) with all the detail and color that was there, BUT our eyes will not see all that without using post-processing software to bring out the latent details in the RAW image. While this is an oversimplification, the bottom line is that you will rarely see the degree of contrast and the accuracy of colors in a RAW image as it initially comes out of the camera. Some post-processing is needed on virtually every image in order to bring out what you really saw. Some images need more optimization than others.

Because this image was shot pre-sunrise, it inherently had low contrast and the colors were somewhat muted. Add to that the nature of camera sensors I mentioned, and you have a Before image that is gray and lifeless. I wanted to bring out the colors and contrast that my eye saw when I was there, and that required some help from Lightroom.

The "fix" took about 5 minutes, and brought the image closer to what I actually saw. I admit that I did punch the blues and pinks a bit more than were really there, but they still look natural.

The simple steps in Lightroom to improve this image were:
1. Lightened the shadows with the Shadows Slider.
2. Brightened the whites with the Whites Slider so that the mist on the horizon looked white.
3. Increased Clarity to boost the mid-tone contrast.
4. Increased overall Vibrance.
5. Used the HSL panel to pinpoint increases in the saturation of the pinks, blues, and yellows.

That's it. Just those few easy steps brought this image to life.

So now that we have lots of time at home, a great project is to go back over some of your older images and re-work them in Lightroom to see how much you can improve them. You will be amazed at what you can do, even on old images that you have already processed.

Once you get into this, you can spend many happy days creating "new" and better images from ones already living in your photo files. And remember, for your health and well-being get up and stretch or walk around every 30 minutes or so, even though it is easy to sit for hours and not realize it!

TODAY'S QUOTE: "Learn as if you were to live forever."  --Mahatma Gandhi
Posted by Awake The Light at 11:05 AM