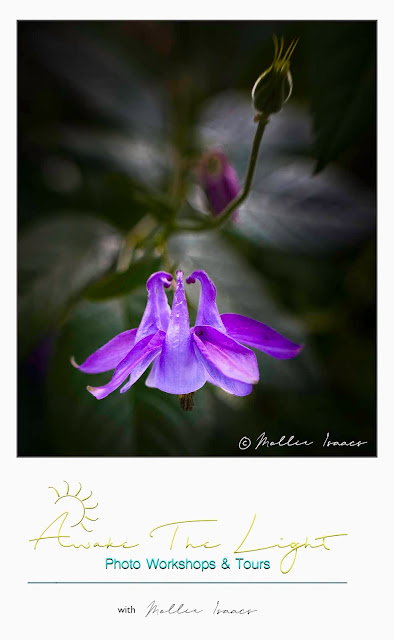 While I was in Chile I saw some absolutely beautiful flowers. This columbine was blooming in the garden on one of ranches ("estancias", as they are called) where we stayed. The flower was perfect and beautiful, but the surroundings not so much.

So I used the LensBaby Sol 45 to add a creative blur which certainly helped. But as you can see in this Before version, even that was not enough to make the flower the star of the show.
So Lightroom came to the rescue. I wanted the flower to stand out, but I also wanted the tall stem behind it and the mottled background to add to the story.

The strong sunlight caused the leaves in the background to appear almost white, and they needed to be toned down in order to not take attention away from the flower.

And overall, the background competed with the flower and also needed to be toned down.

Here are the tools used in Lightroom to change this image into a more dramatic rendition of the scene. But first a word of caution - this degree of drama changes the look of the actual scene and might not be allowed in certain photo competitions. So if you plan to enter nature competitions, be sure to check the rules and make sure that these sorts of major changes are allowed. Note that nothing in this image was actually changed or eliminated, but even so, it does render the scene completely differently from the original. In this case I was going for a dramatic look, and not a standard shot of the scene itself.

That's it. It doesn't sound like much, but those few steps in Lightroom helped to turn this image into a much more dramatic scene.

TODAY'S QUOTE: "It's not what you look at that matters, it's what you see."  --Henry David Thoreau
Posted by Awake The Light at 11:03 AM