Faster Than A Speeding Bullet (Almost) 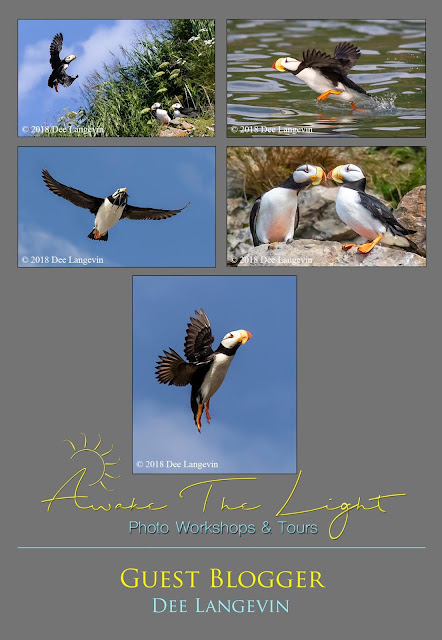 These interesting birds look like little clowns in tuxedos.  They have large colorful beaks, stocky bodies, short wings and colorful orange feet with dark black feathers above while their breast feathers are a pristine white.  They come to land only during the summer to breed and raise their young, spending most of their lives at sea.  We enjoyed watching them run across the surface of the water as they took to the air and careened around the hills and rocks of the island as they flew out to gather fish, and then returned to the nest.

It is a formidable challenge to capture these speedy birds in flight as they are incredibly fast and change direction frequently and just as quickly.  They fly at speeds up to 55 mph with up to 400 wingbeats per minute!  Waiting for them to roost on a sunny rock makes photographing the little critters a much easier task!  At times the birds swooped just over our heads or passed between us on the sandy beach.  Hundreds of birds flying in every direction made it difficult to decide which way to point the camera.

I found that observing the birds for awhile and determining their flight patterns made it easier to follow them.  I checked the best sun angle, then tracked them and waited for them to cross a patch of blue sky before pressing the shutter in high speed burst mode.  The results were some amazing sharply focused birds, with some puffins carrying twigs or fish back to the nest. To be honest, there were also a number of images with fuzzy puffins, puffin body parts or clear blue sky, but those are easily deleted in favor of the prize catches.  If you like a challenge, shooting puffins in flight is definitely a demanding test and tons of fun!

[Editor’s Note: Dee is one of the best bird photographers I have ever seen. She understands their habits, and pays attention to wind direction, and the direction of the light as well. And she can instantly lift the camera to her eye, focus, pan, and zero in on awesome shots in a heartbeat. Next year’s exciting Brown Bears and Puffins trip is already scheduled for July 15 – 21, 2019. Get all the details at this link  http://awakethelight.com/brown-bears/  ]

TODAY'S QUOTE: "The purpose of life, after all, is to live it, to taste experience to the utmost, to reach out eagerly and without fear for newer and richer experience."  --Eleanor Roosevelt
Posted by Awake The Light at 9:28 AM