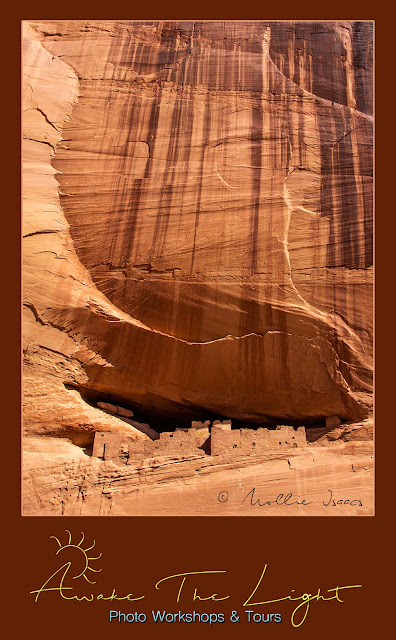 The two most pivotal things that got me started in photography many years ago were the first time I had the opportunity to use an adjustable 35mm camera, owned by my high school friend Marion (with whom I am still friends today), and seeing the work of Ansel Adams. His images of unique and beautiful places in the west were arresting and compelling. So compelling in fact that I went to his home bases of Carmel, California and Yosemite National Park to have two short stints of studying with him. Those were deeply meaningful times in my photographic journey.

When I first saw his photograph of the ancient Native American ruins at Canyon de Chelly in Arizona, I knew that someday I had to go there to see it in person.

I got that opportunity a few years later, and on my recent trip to the desert southwest I made my fourth pilgrimage to this special place. There are ruins scattered throughout Canyon de Chelly and other nearby canyons, and this one, named White House Ruin, is among the most beautiful.

Part of the beauty of this place is not only the ruins themselves, but also the dark streaks marking the cliff faces. Called Desert Varnish, the streaks are caused by mineral deposits formed over thousands of years, left behind by the evaporation of dew and water, and then polished by the winds.

While my image pales in comparison to the photographs Ansel Adams made of this place, I did make an attempt at the black and white conversion below using Lightroom. See Ansel Adams original photographs made of White House Ruin here  http://anseladams.com/white-house-ruin/

If you have a preference, let me know if you like the color version or the black and white version better. 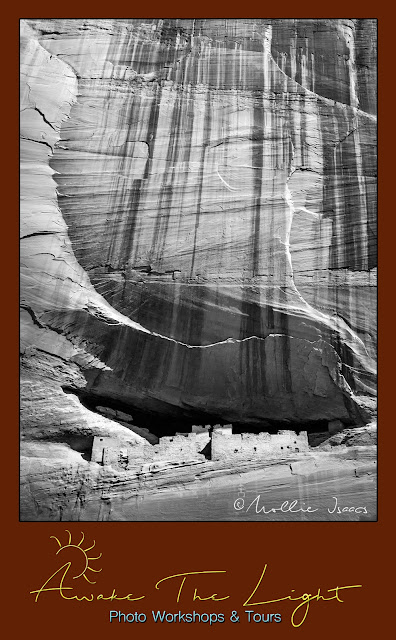 TODAY'S QUOTE: "Some photographers take reality and impose the domination of their own thought and spirit. Others come before reality more tenderly and a photograph to them is an instrument of love and revelation."  --Ansel Adams
Posted by Awake The Light at 4:38 PM