Get Your "Artsy" On! 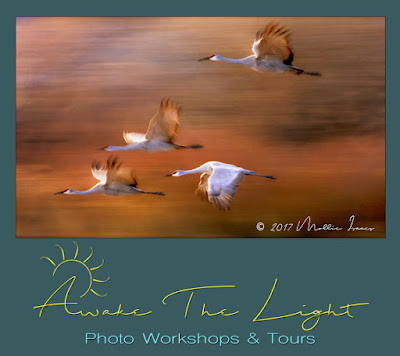 Sometimes you just have to get artsy. Things do not always need to be sharp and crisp. There are times when softness and a bit of a creative blur is a good thing. And sometimes it happens when you least expect it.

These sandhill cranes at Bosque del Apache Wildlife Refuge were flying in at sunset. The light level was dropping quickly and I did not keep a watchful eye on the shutter speed. It had dropped to 1/30th sec., much too slow to keep wing beats sharp. But I got lucky.

I was panning the birds as they flew past me, keeping the pan speed pretty much the same as the birds' speed, which created a nice blur on the background. When I downloaded the images later in the day, and realized that this was shot at a relatively slow shutter speed, I thought it would end up being deleted because very little of the image is sharp. But when I gave myself time to "live with" the shot, and looked at it with fresh eyes, I realized that it was an impression of birds in flight rather than a scientifically accurate version.

The lesson for me was that sometimes you have to let go of what you expect an image to be, or what is an "acceptable" image, and allow yourself to view it from a different perspective.

TODAY'S QUOTE: "In order to see birds it is necessary to become a part of the silence."  -- Robert Lynd