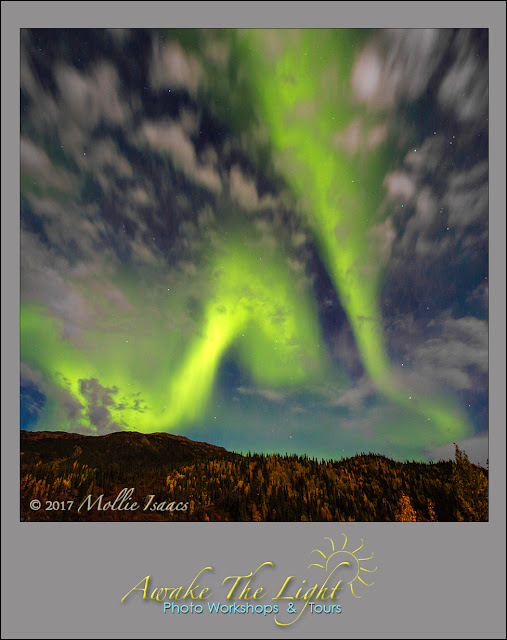 Seeing the Northern Lights (Aurora Borealis) is one of Mother Nature's most spectacular gifts. The undulating colors and shapes that dance across the sky are mesmerizing and compelling. And because you never know where and when they will occur, you feel incredibly lucky when they make an appearance during your time in a northern location.

Generally the Northern Lights are visible far to the north from September to March. While they can occur at anytime of year, they are rarely visible to the human eye in summer because of so many hours of daylight. You need reasonably dark skies to see them best, but complete darkness is not mandatory, as you will see in the tips below.

We were lucky to see them on the recently concluded Denali National Park trip. It was very exciting! Next year's trip to Denali, August 25 - 31, is at about the same time of year, so we will have a good chance of seeing them. Of course there are no guarantees, and a lot depends on sunspot activity, but I am hopeful.

Before giving you some great tips, and debunking some erroneous assumptions, here is what one of the participants on this year's Denali trip had to say:
"The Denali photo tour was the trip of a lifetime for me. The mountain views were breathtaking and majestic, and I have the pictures to prove it. Because of where our lodge was located, we were taken to areas that most people never see. We had two rare wolf sightings, plus caribou, moose, and the cutest ermine who played peek-a-boo. In addition, we had one fabulous meal after another. The trip was far above my expectations, and I had very high expectations. Mollie is an amazing teacher - she motivates you to shoot your best work, and doesn't spend a lot of time taking her own photos. She even instructed us how to shoot the Aurora Borealis, and she was out there with us at 3AM when they appeared. After a week with her instruction and encouragement, I am a much better photographer."  --L.R.

TIPS FOR PHOTOGRAPHING THE NORTHERN LIGHTS
1. Camera and other gear  -  camera body (either full-frame sensor or crop sensor will work - I have used both) with the widest angle lens you have. I use a 17-40mm zoom, set at 17mm. Sturdy tripod. Cable release or remote trigger for the shutter. Headlamp or small flashlight with red filter - white light will annoy others and diminish your night vision.
2. Camera settings  -  Set your camera to Manual Exposure. ISO 3200 or 6400 (I prefer 3200 because of noise issues, and Lightroom does a good job of removing noise even at this ISO). Aperture f/8. Shutter speed either 15 seconds or 25 seconds (try both and settle on the one that works best). Avoid longer exposures since they will render the stars as streaks and will detract from the Aurora.
3. Where to shoot  -  if preliminary reports (from locals and from the website http://www.gi.alaska.edu/AuroraForecast) indicate that aurora activity might be good in your area, go out in daylight to find an open area that faces north. Choose an area with open sky and not a lot of trees or buildings that might block your full view of the sky. Make sure that whatever land forms (trees, hillside, etc.)  that will be in the images are fairly far away.
4. How to focus  -  Focus on that land form. That will place your point of focus close to Infinity but NOT at Infinity. If you set your lens on Infinity, the trees or hillside will not be sharp. Bring wide masking tape with you and tape your focus ring securely so that you will not accidentally rotate it before shooting later that night. Now, if your lens has been set to autofocus, be sure to set it to manual focus. You do not want autofocus to kick in when you trip the shutter.
5. Set up an Alert Rotation Schedule so that someone in your group checks for activity every half hour between the hours of midnight and 4AM.
6. Go to dinner and get to bed early. Be sure your camera is already on the tripod, with cable release or remote trigger attached.

Join me in Denali next year, August 25 - 31. Details here  http://awakethelight.com/denali-national-park/

TODAY'S QUOTE: "Like going on safari or whale-watching, seeing the Aurora is a beguiling marriage of sheer luck and the effort you make to be in the best place at the optimum time."  - Nigel Tisdall