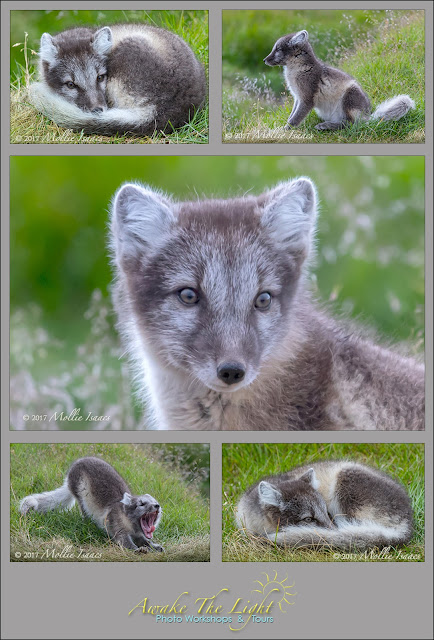 I just returned from Iceland last night. It is one of my favorite places. It was an amazing trip with a wide variety of photo opportunities, including this completely unexpected sighting of an Arctic Fox. It was a young one who appeared on the grounds of one of our rural lodges. He was not concerned by our cameras, and stayed around for a few minutes, allowing us to get some shots.

He posed, he stretched, he yawned, and then curled up for a little snooze. Arctic Foxes are the only land mammal native to Iceland. It numbers have been declining in Iceland since 2010, and the population is now estimated to be about one-third of its former numbers. They are said to be comfortable around humans in areas where they are not hunted, and clearly this one was very comfortable with all the photographic attention he was getting.

Regardless of how tame any form of wildlife appears to be, it is always vitally important to realize that ANY wild animal can be unpredictable and should be approached carefully and treated with respect.

TODAY'S QUOTE: "Until he extends the circle of compassion to ALL living things, man will not himself find peace."  --Albert Schweitzer
Posted by Awake The Light at 11:20 AM