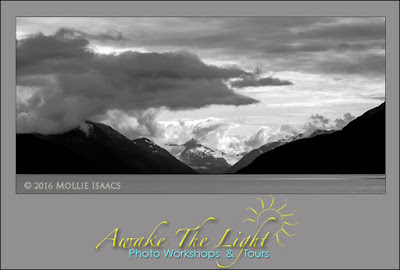 I am back in Alaska for my annual photo tours here, and happy to be here. Flying in yesterday we were greeted by snow-capped mountains and glaciers down below. The cool 60 degree afternoon was a welcome respite from the 90 degree summer heat back home.

The first of three photo tours over the next several weeks officially begins tomorrow  -  first Denali National Park, then Glacier Bay National Park for whales and glaciers, and finally Lake Clark National Park for brown bears  -  so today we took a short jaunt outside Anchorage along Turnagain Arm. The dramatic clouds were very punchy against the craggy mountains that flank the waterway. This black-and-white conversion was done in Lightroom to accentuate the contrast and texture.

The overall light level was low because of the heavy cloud cover, throwing the closest mountains into shadow. The brighter areas in the background stand out, and the large dark cloud adds drama to the scene.

Soon we will leave the coastal areas and head deep into the beautiful mountain country of Denali National Park. Stay tuned for photos and stories of adventure over the next few weeks.

TODAY'S QUOTE: "It is only in adventure that some people succeed in finding themselves."  --Andre Gide