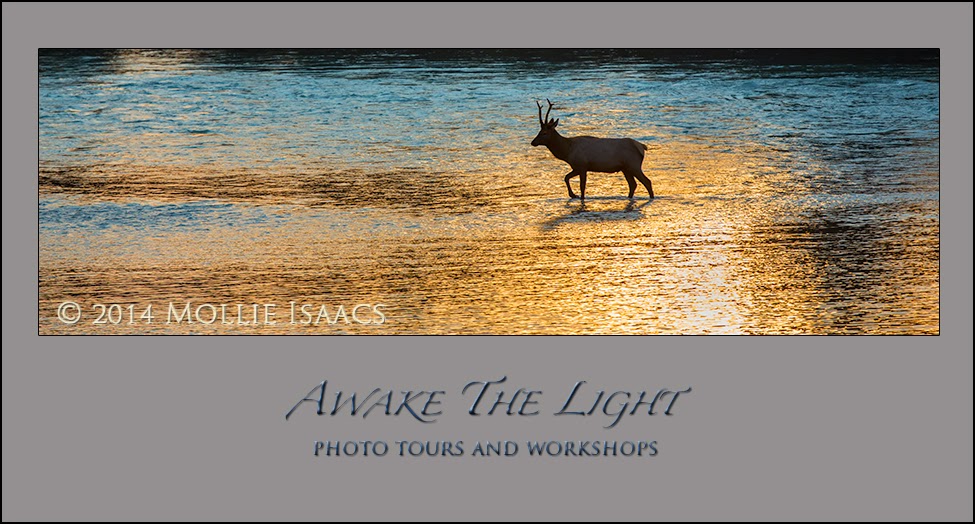 We woke up early to be on location shortly after sunrise to photograph a huge male elk and his harem of about a dozen females. We found them right where we had seen them the previous afternoon. We also found a gaggle of photographers with huge lenses and not much sense, walking much too close to the animals and following them into the nearby brush as they grazed. With their long lenses there was no need to be so close, but their egos and their sense of entitlement seemed to overpower their common sense and respect for the animals.

I was glad when a ranger appeared and gave them a serious but polite lesson on safety around large animals. Of course they already knew all that they were told, but apparently did not think the law of the jungle applied to them.

In any case, we shot for about an hour and got some great images of the large male and several females. While the intrepid group of disrespectful photographers followed behind the group of elk as they moved on into thick woods, we decided to venture down the road in search of whatever we could find.

In less than 2 minutes we came upon two young male elk walking in a wide river just off the road. We arrived just as the sun was cresting above the hillside behind the river, creating yellow-orange highlights on the pristine blue water. The animals were silhouetted against the bright water. We were thrilled at the incredible sight, pulled safely off the road, grabbed our cameras and began shooting. One of the elk walked slowly forward, aligning himself with the brightest streak of sunlight on the water.

What a lucky find! It was the shot of a lifetime, one of many we have experienced on this trip. Had we stayed at our previous location, following the herd (of elk AND photographers) we would have missed seeing this beautiful scene.

Pure luck? Yes. But also a small amount of common sense. We knew we had captured good images of the herd at the first location, and did not need to hang around there any longer. We sought greener pastures, and we sure did find them!

Because the river was so brightly lit, I exposed for the water, allowing the elk to be silhouetted. His perfect profile makes clear what he is, and no detail is necessary on his fur or face.

So once again this blog is about good sense around animals, not following the crowd, and making your own luck as much as possible to find great shots when you do not expect them.

TODAY’S QUOTE: “The one who follows the crowd will usually go no farther than the crowd. Those who walk alone are likely to find themselves in places no one has ever been before.” Unknown (various attributions)
Posted by Awake The Light at 9:41 AM