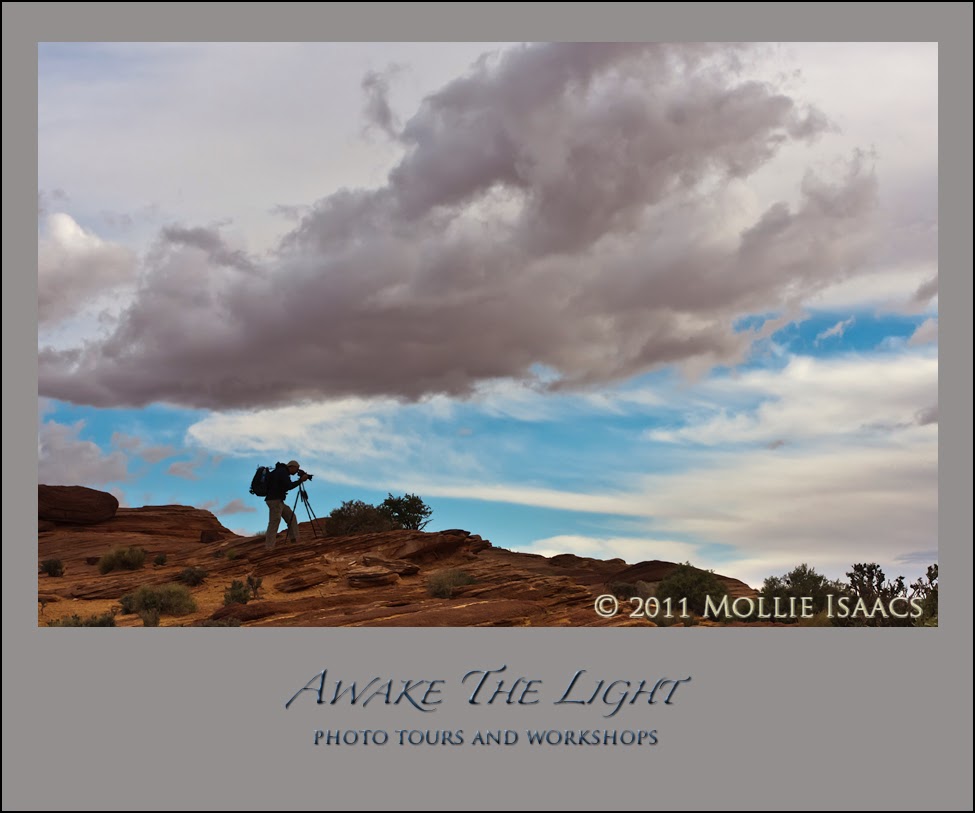 Silhouettes can create an eye-catching, graphic photograph. Typically it involves a very dark main subject against a brightly lit background. One example would be someone standing just inside the open doorway of a darkened room with a bright sky outside behind him.

While capturing a silhouette in the situation shown above is a bit unusual, it was easy to create. It took the right lighting conditions and the right clothing to make it happen.

I was photographing expansive desert southwest scenery when I stopped for a moment to look around and just enjoy and appreciate the red rock surrounding me. That’s when I noticed a photographer on a rocky outcropping. His body position was perfect with his legs, tripod and camera clearly outlined against the cloudy blue sky. It was early morning and the sun had not risen enough to light the area where he was standing, but the sky was already fairly light behind him.

The net effect was that he was mostly in shadow against the much lighter sky. His dark clothing enhanced the silhouette effect. When I snapped the shutter I did not know how dark he would actually appear in the image. There was no time to think about exposure. I just shot and hoped for the best. Since the light sky behind him occupies the vast majority of the image, the camera exposed for that, resulting in  him and the rocks being rendered quite dark.

After downloading the image and optimizing it in Lightroom, I reduced the Shadows slightly to enhance the silhouette effect.

This was one of those serendipitous moments that do not happen often. He was in this position for only a few moments. I was able to fire off four quick shots before he lifted his tripod and moved on. It was simply good fortune that I just happened to look away from what I had come there to photograph and noticed him and this shot.

This was an important lesson. Always take a short break from whatever you are photographing to survey everything that is around you.  You never know when something completely unexpected and wonderful will present itself.

TODAY’S QUOTE: “Serendipity always rewards the prepared.”  --Katori Hall
Posted by Awake The Light at 8:38 AM